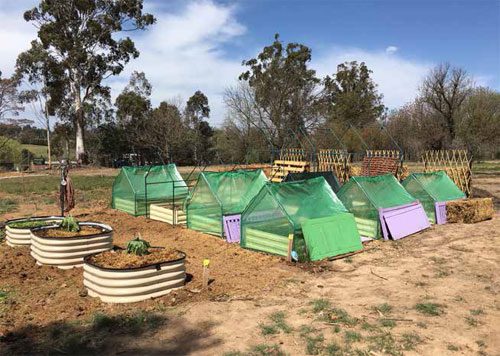 The peace and quiet of the Betty Cornhill Garden (formerly known as the Cotter Garden) is occasionally broken, especially early in the morning, by the roars from the lions at the National Zoo which is just across the Molonglo River. The slap of opening parachutes and the occasional scream of skydivers aiming to land at the nearby ovals can also be heard.

About a third of the garden site is under cultivation with some 30 plots in use. Plot The Cotter Garden was renamed the Betty Cornhill Garden in 2016 in honour of the founder of COGS, Betty Cornhill.

The Cotter Garden was the first COGS community garden being established in the 1970’s. Betty gardened there from its inception until ill health a few years ago forced her to give up her garden plot.

The Garden was initially located next to the Cotter Road in Curtin. This explains its original name. In the early 1980’s the garden was moved to its present location near the Yarralumla Woolshed to allow the widening of the Cotter Road. Construction works for the road widening commenced in December 2016!

However, the move brought a number of benefits. The current site is larger (about a hectare) and is in a quiet, secluded location accessed by a shaded lane through a closed gate. It is surrounded by the horse paddocks of the National Equestrian Centre.

The garden has recently upgraded its infrastructure with new water reticulation installed and a new shed.

The Garden has a ”laid back” style of management with relatively few working bees to tackle major works. The approach taken by the gardeners is that if someone sees something that needs doing – they just do it.  It works!