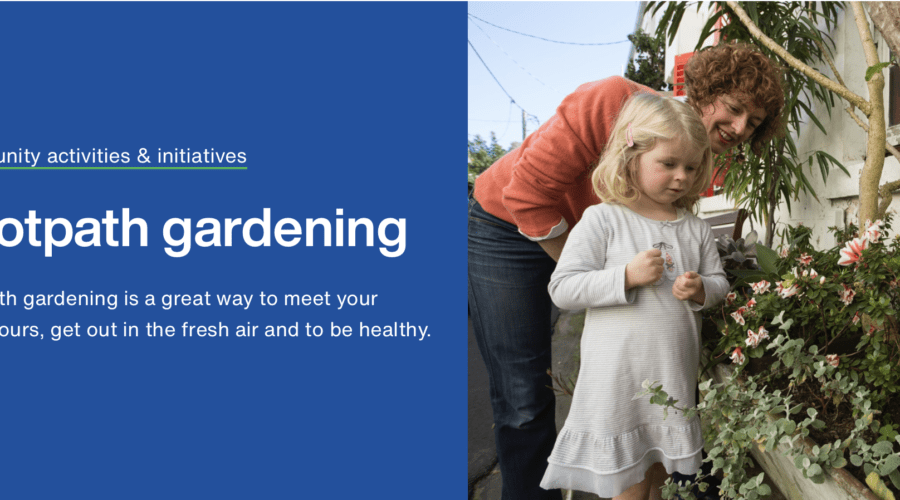 MONTHS IN THE MAKING, the draft Footpath Gardening Policy was adopted at the May 2012 meeting of the City of Sydney council (updated September 2020).
The policy applies to householders and businesses wanting to place a planter box on the footpath outside their premises. It does not apply to community-managed footpath gardens which have been covered by the City’s Community Garden Policy since it was introduced around two years ago.

How these two policies—the Community Garden Policy and the Footpath Gardening Policy—will intersect in future remains to be seen. The Community Garden Policy doesn’t stipulate the type of garden—whether raised containers or built on the ground—but the Footpath Gardening Policy clearly prefers container gardens. Whether future community-managed footpath gardens are to be only in raised containers will depend on the approach taken by the City’s community garden coordinator and the manager of the City’s Parks department—and, of course, whatever influence public footpath gardeners apply.

Reflecting on my contact with footpath gardeners while I was working at the City  as community garden coordinator and on contact with footpath gardeners elsewhere, I believe both models—raised container gardens and on-ground gardens—are appropriate and that the City should leave open the option of both. The appropriate place for raised gardens is where there are services such as sewage, water and gas below the ground. A container garden, with a base, can be moved aside by a lifting machine so that utility companies can get to their buried lines to service them.

The Footpath Gardening Policy was stimulated by public interest in the activity. Development of the policy started in 2011 with research into the existing policies of other councils and by viewing examples of footpath gardens such as those in Chippendale and the raised garden built by Michele Margolis in Marrickville, among others. I inspected Michelle’s raised footpath garden and measured it as well as its offsets from the kerb and access to the street, and found these adequate.

The Footpath Gardening Policy streamlines the approval process. If gardeners can comply with its guidelines they forward the checklist to council and build. There are no charges levied and bureaucratic procedure is minimised.

The footpath gardens along Myrtle and Shepherd streets in Chippendale were assisted by the City well before council had a policy on footpath gardens. Although there was not universal support for them (tell me anything like this that has ever had universal support) they have proven an urban design element that has brought together people in the enclave although design details like access to and from the street could have been done better but have since been improved.

While I was at the City I assisted two new footpath gardens make a start under the Community Garden Policy. One of these was in the Arthur Street road closure in Surry Hills and the other was the Waterloo Community Centre footpath garden. Working with a person in the City’s Sustainability department, I negotiated with project supervisor, TAFE Outreach, and the community centre to construct their gardens as a rapid prototype to assess the model preferred in the then-draft Footpath Gardening Policy. This proved successful.