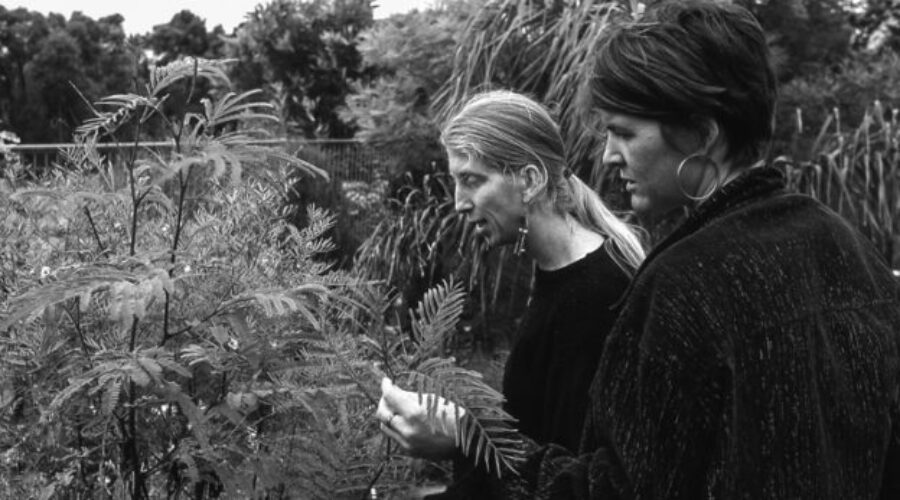 A case study in early urban farming and sustainability education.

Calmsley Hill City Farm was not a community garden, more an agricultural theme park. Managed independently for Fairfield Council in Sydney’s south west, when I and Fiona Campbell were employed there as landcare educators the city farm was on the edge of the city, the place where town abruptly met country.
Perhaps it was also the city’s first example of a working farm-come-education-centre within the city limits, a foretaste of what would later become a popular social movement in urban farming.

Calmsley Hill City Farm occupied undulating land that culminated in a high ridge that formed the farm’s high point. That ridge was the watershed of the Georges and Nepean rivers. Eucalypts the remnant of the forest that once covered the area still grew up there and a walking trail took visitors to where they could look west towards the Nepean and Blue Mountains and east over Sydney’s Cumberland Plain. It was a revealing and uplifting experience to stand up there and gaze upon the landforms that made this landscape millions of years ago.
The area was being urbanised then, the process by which the green fields of farms become the paved roads of encroaching suburbia. The farm was safe, protected by landuse legislation from having its fields covered in pretentious houses far-too-large with gardens far-too-small. ‘McMansions’, they were called. The sea of houses stopped abruptly there at the farm’s front gate.

Our work was educating visiting schools, the public and, for Fiona, young children of the Wanda Worm Club.
Calmsley Hill was well suited to landcare education. Farmed for more than 150 years, it had the requisite erosion, soil compaction, gullying and soil creep on the steep slopes and a dam wall collapsed by the eucalypt growing on it the roots of which tunnelled through the dam wall and drained the dam, turning it into a reedy wetland. Oh, yes, there was soil salinity too. Bushland regenerators were removing the exotic African olive that thrived on the clay soils of the ridge’s lower slope. That was no edible species like the familiar European olive we all love to eat, more a weedy species.
The farm also had good land management practices such as the ten megalitre farm dam in which visitors could fish Australian freshwater species for their evening meal. Here, Fiona would use her civil engineering design drafting background to tell school and other tours about how the dam wall was designed.

Sydney permaculture designer and educator, Bronwyn Rice, was contacted to design an organic food garden and chook system through a scheme then in existence, Urban Landcare. The land here was of moderate slope, falling to a broad grassy field below.
The garden was quite large, more the scale of a small market garden. Its purpose was to supply fresh veggies and herbs to the farm’s cafe.
Vegetables were to be planted between the cafe building and the worm farm further downslope. On completion of the works the entire garden area was mulched with straw from the animal pens.

It was a rather elaborate worm farm. A double brick structure about a metre in height that wound like a restless snake across the garden for perhaps 60 metres, it was filled with stable sweepings from the animal barns that housed a large number of chickens, horses, sheep, pigs and cattle — and a semi-domesticated ferret that was quite happy to take a nip at any fingers close-by.
The worm farm was located along the wide brick path that traversed the garden. This was designed for large numbers of visitors, such as the schools that came here on their study excursions, a design characteristic for any site hosting a large number of visitors.

The orchard, or in permaculture parlance, the ‘food forest’, was located downslope of the worm farm on the other side of it.

Being sloping land, rainwater runoff drained down towards the orchard. Bronwyn thought it a good idea to harvest and make use of it in the best permaculture tradition of valuing and utilising renewable resources where they are available. Her solution was a retention or infiltration trench, a ‘swale’ in permaculture parlance, incised into the clay soils across the contour of the slope. Rains soon tested the design, filling it to capacity. Excess water drained from a narrow spillway at the end of the trench.

A mixed planting of fruit and nut trees was to be established either side of the trench. This was the orchard or, if you prefer, the food forest.

Not all chooks enjoy the comfort of an energy-efficient, sunward-facing but shady inside house made of cavity bricks that provided insulation. This climatically-adapted and passive solar construction housed a large number of birds.
A door at the rear gave onto a long alley. Off both sides of the alley were three large yards on each side. High wire fences protected the chooks from predators. These were the grazing yards of the rotational chook/vegetable production system.

How this worked was by planting the yards to vegetables. After harvesting the first yard, the chooks were let in to eat the crop residue, loosen the soil with their scratching behaviour and fertilise it with their scat. That done they were released into the next yard after harvesting. As evening approached they were herded back into their passive solar house. And so it went in a plant > harvest > chook > replant cycle. It demonstrated productivity in a small area, another permaculture design idea.

Beside the cafe and separating it from the chook system was the southern hemisphere’s, perhaps the world’s, largest herb spiral.
Herb spirals were popular among permaculture practitioners at the time. Based on a theory never really tested in any scientific way, they were essentially mounds of soil planted to sun-loving herbs on then sunward (northern side, that is — this is the southern hemisphere) side and those preferring shade on the southern.
Herb spirals were usually modest structures no larger than two metres in diameter and maybe a metre in height. With that at Calmsley Hill City Farm, however, Bronwyn outdid all others. With a diameter perhaps seven and maybe more metres, visitors could walk up the spiral following the path formed by the posts that held the thing up. This was no modest structure, more a small hill.

Fiona and education program manager, Mary Bell, and I produced manuals to accompany the program, three in total if I remember correctly.
Our work at Calmsley Hill City Farm ended when the school’s educational program finished. Bronwyn finalised her design assignment and went on with her teaching the Permaculture Design Certificate course in Sydney. Mary Bell later went to work at Sydney’s Royal Botanic Garden. Fiona went into graphic design with a Northern Beaches local government. I went to Greening Australia as their NSW community liaison and newsletter editor.
Before the Calmsley Hill City Farm design project, Bronwyn was contracted to design and train people in the Eveleigh Street Community Garden in inner-urban Redfern, in the area known as The Block, home to a sizeable Aboriginal population. She later disappeared from the permaculture scene.
Management of Calmsley Hill City Farm was later taken over by a private group and, last heard, was still functioning as an agricultural theme park.
The Farm is a largely-forgotten episode in sustainability eduation in Sydney. A conventionally-managed farm, the education program, farm events and visitation was a gateway to learning about farming for city people. It was also an example of a working urban farm that pre-dated the urban farming movement by decades.