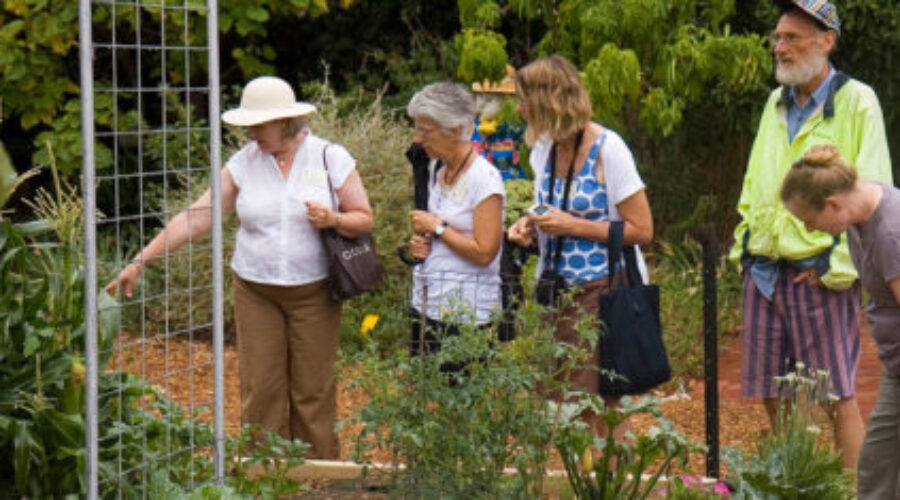 It seems a simple thing for councils to do. Handing over an area of public land for people to turn into a community garden.

Like many things, so seemingly simple, it turns out to be more complicated. This is because councils are responsible for public land and they need to be confident that the land will be managed responsibly.

There are six points that councils will probably consider before handing over care, control and maintenance of a patch of land. Particular councils may have more. My question is whether they need more at all.

When working in local government as a community garden/Landcare coordinator I considered these points when I received proposals for community gardens on council land or on a footpath. I used a simple spreadsheet on which I listed the six points and how a gardeners proposed to deal with them.

First, though, I would meet with the people proposing the new community garden and encourage them to read the council’s community garden policy if they had not yet done so. I asked whether they thought about how they would make decisions, communicate among themselves, with council and the public, and how they would resolve serious disagreement. That was an important question because working with people is more challenging than working with plants. Dominant or difficult personalities in the garden can be the reason community gardeners quit.

My six considerations for new community gardens or community footpath gardens were:

Councils are risk-adverse and sometimes they take this too far. Staff unfamiliar with community gardening can imagine low-probability possibilities and use these to argue against proposals for community gardens. When excessive risk aversion dominates the council psyche, community gardens might not happen.

I’m not suggesting risk assessment is not worth considering. It is. Councils have a responsibility to ensure works on public land are safe for both the users and visitors, and so do community gardeners.

One of the topics I would think about and discuss with the community garden team proposing the development was the types of plants they would establish. Poisonous species are best be avoided in community gardens where there are children, and footpath gardens might best avoid thorny species and plants overhanging the footway below three metres. Where gardeners would grow irritant plants, such as hot chillies, they sometimes make a graphic sign to warn young children that they are hot tasting.

Then there is construction. Would garden beds and other construction be sturdy enough to cope with a rough-and-tumble urban environment?

Would timber be made smooth so as to avoid splinters? Would sharp edges be smoothed? This might sound fastidious, however the concerns are based in reality. In one community garden that participants built themselves, construction was sturdy but one of the metal brackets holding the raised garden beds together had sharp edges at child-head-height. The garden was not fenced and was one of the landuses in a multi-purpose city park, so it wasn’t only the gardeners who could rip their skin. The garden team soon fixed it.

Public safety, then, includes consideration of:

This is about how gardeners manage the community garden.

Councils sometimes stipulate that only organic gardening methods be used in community gardens. This is a good idea because:

Other environmental management considerations in assessing community gardens for approval, and for continued assessment of their management, are:

We must remember that we live in an urban environment with a broad biodiversity consisting of food, ornamental home garden and native plants and that nature doesn’t really care too much about plant species and where they come from when it comes to occupying bare soil with plant life. Our urban gardens are often blended ecologies of edible, exotic (those originating out of the area where they are grown) and native species.

Councils will usually ask about about how a community garden will be maintained because what they don’t want are people with a good idea starting something then walking away from it. Walking away is what guerrilla gardeners sometimes do and it leaves the plants they establish to wither and die in summer’s heat or to be overcome by rampant weed growth.

Gardeners sometimes do not consider maintenance or make the assumption it will happen without thinking what will need doing. How will the community garden be maintained? There’s irrigation, pest management, soil improvement and other needs to think about and plan for.

There’s also maintenance of the community garden group. How will they make decisions democratically? Resolve severe disagreement? Communicate with each other and with others outside the garden such as neighbours and with council?

Here we get into the sticky mire of subjective consideration around which consensus is unlikely to be achieved.

People have their own sense of aesthetics. A community garden planted to look and work like a natural bush, for instance, might be seen by some as untidy because they don’t understand the ecological principles behind the design of forest gardens of this type. A garden of neat-looking straight lines and rectangular garden beds could appear boring and uninspiring to others.

When the Coogee Community Garden was being considered by council, someone living nearby leafleted the street opposing the garden. The photo they used on their leaflet was of Randwick Community Organic Garden. Taken through the fence around the garden, the opponent said the garden was an eyesore and something similar was not wanted on their street. Clearly, they failed to discern the logic of the design. What was an eyesore to them was a well-functioning garden design with a great deal of agricultural biodiversity to member gardeners. Their efforts to stop garden development were in vain.

Coulcil staff without much knowledge of gardening could judge the tidiness of community gardens by their own preconceptions of what gardens should look like rather than from any understading of gardening.

Garden type — whether a food forest of trees and shrubs, an array of rectangular garden beds or a radiating pattern in the landscape like Randwick Community Organic Garden, or whatever other design the gardeners choose, all offer  different appearance. An understanding of the logic of the garden design is a key factor in thinking about visual aesthetics. Lack of familiarity with particular garden designs should not be an argument against garden development.

Maybe a better way of thinking about appearance is keeping the garden in good condition with materials stored tidily and without junk left lying around. That, junk, was the situation in an inner urban Sydney community garden I found when taking a community gardener and researcher from Adelaide on a tour of Sydney gardens some years ago. Usually, a small, lush forest garden, plastics, and other wastes littered the garden, creating a poor impression to local people passing by and a potential source of complaint to council.

As the plantings could be on public land (‘public open space’ is a term frequently used in local government to describe public land) or, occasionally, on council ‘operational’ land (that set aside for council use), councils might specify no, or only a low fence to contain gardeners’ children inside the garden and off the street. This is so that the garden area remains accessible to the public and to avoid accusations of alienation of public land.

Alienation of public land is a frequent objection to proposals for new community gardens. We find it even when gardens remain unfenced when complainants say that the construction of garden beds takes up public space. The example I have in mind is a small, inner urban park where the community garden was given access to half the area. No fence was to be built and the park’s exisiting bench seats were to remain in place so local working people could continue to eat their lunch in the park. A use-survey of the park over a week disclosed minimal use of the park. Yet, despite this, a local woman whipped up opposition around the alienation of public land, claiming it took away land used by local people. Commonly omitted from such argument is the reality that the community garden crew are local people too.

The cost of unfenced or low-fence gardens may be minor vandalism such as theft of vegetables or, as happens, young fruit tree seedlings. Where this has happened in areas I am familiar with, prompt replanting has reduced theft. Once, in my local government role, I offered an inner urban community garden, that was experiencing the continuous theft of young fruit trees, the installation of a high chainlink fence. In turning down the offer the gardeners explained that theft and damage is the cost of doing community gardening in the area. They preferred that the garden remain open to visitors. A very philosophical decision, I thought, and one designed to avoid giving a sense of gardener privilege to local people. There may be situations where damage to the garden is so frequent and costly than a high fence is the only solution.

Linking community garden proposals to city planning documents increases the likelihood of the garden being approved.

Community gardens can implement parts of city greening, food security and social plans. I encourage people thinking about starting a garden to read council’s planning and policy documents and highlight the potential connections with their garden.

For example, food produced in community gardens clearly contributes to the security of the food supply for gardeners. This might have some relation to social plans around community health. It may also contribute to long-range city plans that call for more extensive planting and the creation of biodiversity.

Community gardens can be linked to social planning. They are already used by community workers to bring people together in a common endeavour and in learning about growing plants, in working together successfully, to extend social networks, and to build a sense of place and shared community.
This came across clearly in the Macarthur Food Security Project in Sydney’s far south-west corridor where community gardening was how food and social goals were met by a range of social, religious, and community organisations.

These six points are concerns that council staff might consider when approving new community gardens.