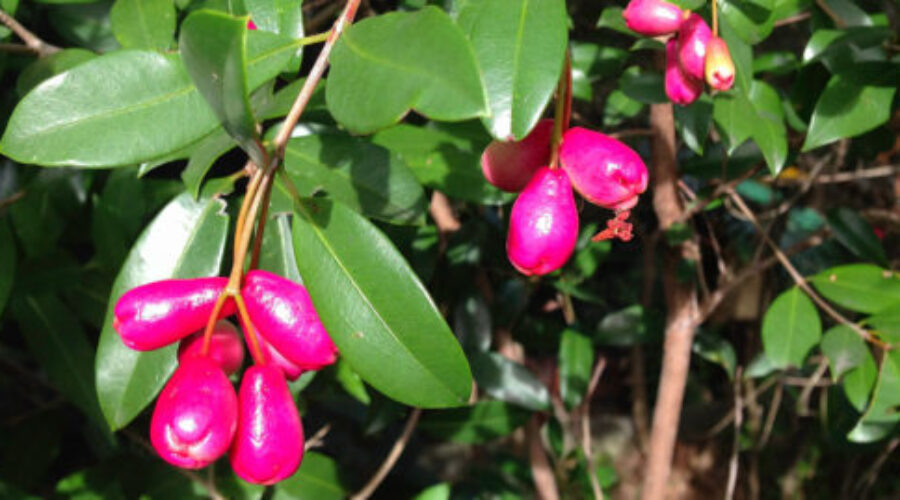 Photos and story by Russ Grayson

The little red fruit on the ground was the giveaway. Reddish and around a centimetre in diameter, they suggested something was happening above. Looking up, there it was. The tree was coming into fruit, it’s magenta coloured fruit contrasting vividly with the dark green foliage of the drip-tip leaves.

Autumn and winter are lillipilly time. That’s when the fruit of these Australian trees of the Syzygium genus, Myrtaceae family, come to ripeness.
Lillypilly is a common tree in the suburbs of Australia’s east coast towns and cities. In its natural occurrence, the species prefers the moister environment of the gully or the edge of the rainforest. Lillipilly is also a favourite of landscapers, especially the small-leaf lillipilly, Syzygium luehmannii, a narrower tree of moderate height attractive to landscapers because of its bronze-coloured new growth and small, pinkish fruits.

Syzygium paniculatum is an evergreen to around seven metres in height and a similar spread. In municipal planting it is suited to parks and public places. It is also suited to the landscaping of commercial and industrial land.

Planted in public places such as on footpaths, the tree produces the summer shade that reduces the urban heat island effect whereby cities are hotter than their surrounding territory, encouraging energy consumption for air conditioning.

The species is suited only to the larger community gardens and permaculture properties. In smaller gardens might take space better planted to more-commonly-eaten fruits.

Perhaps the most useful location in the community garden or on a permaculture site would be as part of a mixed planting on the windward side. There, with other species, it would serve as a windbreak to shelter vegetable and fruit crops from strong hot or cold winds. It may also offer refuge to birds, adding to the wildlife conservation and biodiversity role already performed by these gardens.

As with all tree plantings planned for smaller permaculture properties and in community gardens, consider the mature height and width of the tree before planting. Avoid planting other long-lived trees where the lillipilly will eventually shade them out. Instead, plant short-lived small trees, the fast fruits https://communitygarden.org.au/2011/01/10/fast-fruits/, in the area that will eventually be shaded by the lillipilly. Depending on climate these might include pawpaw, banana, tamarillo and babaco. They will go through a several generations before the lillipilly shades the soil where they are growing.

For community gardens and permaculture properties that cultivate an area of native plants, the magenta lillipilly would be a fine specimen that knowledgable gardener-cooks can harvest for its fruit, turning them into tasty sauces and other foods http://tasteaustralia.biz/bushfood/native-fruit/lilly-pilly/. They are also edible raw. In such a specimen garden the shade cast by the growing tree would be a suitable place to make a small pond to attract insects and amphibians or to place a seat where people can sit out of the hot summer sun.

Magenta lillipilly planted as street or public place trees offer urban foragers the opportunity to glean free food. First, though, check whether the tree is maintained by a community group who plan to harvest the fruit themselves, so that you don’t freeload and deprive them of their hard work.

The same goes for taking lillipilly from community gardens, unless you are a member.

Home chefs: Do you have any lillipilly recipes share? Just add them in the comments below…