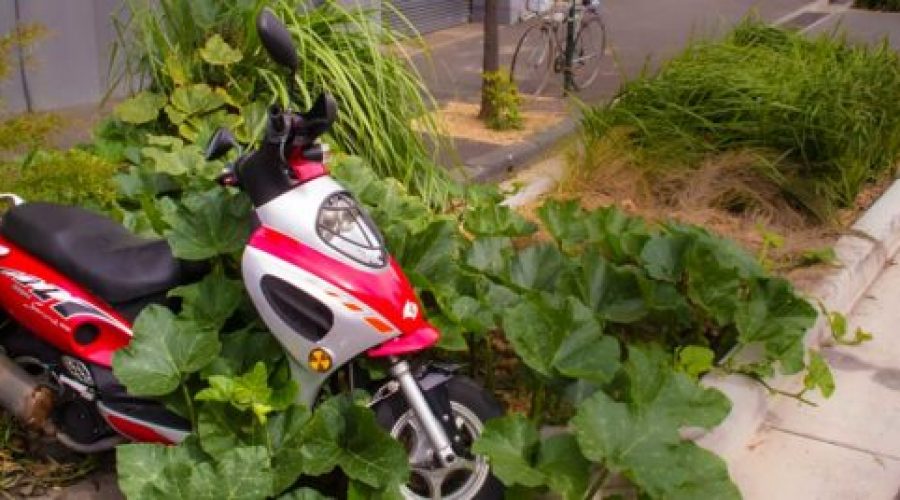 Story and photos by Russ Grayson, 2017

I NEVER planned to get involved in the politics of growing food on footpaths.

It was an imaginative idea, I thought when it started to attract a greater number of practitioners almost a decade ago. Quickly I saw a few problems developing and I wrote a short ebook — Farmers of the Urban Footpath — as a compilation of design ideas and to set out a social and urban development rationale to support the practice.

But there’s nothing like writing a book to become billed as an ‘expert’ by the media. Print and radio media interviews followed and interest has grown such that now people are using the practice or gardening the footpath as a topic for their tertiary studies.

An inner urban footpath garden brings colour and food to the street. Notice how the gardeners have made access paths into the garden for maintenance and harvesting, and how the pedestrian way has been left clear. Rainwater has been diverted from the downpipe into the garden for irrigation.

That is how I came to meet Jesse, a PhD student then in Japan and previously living in Hawaii. And that is how Jesse came to make his way to the classroom-on-the-commons at Randwick Sustainability Hub, the name given the community education program at Randwick Community Centre.
Being interviewed by Jesse made me realise how far the idea of urban agriculture and urban food security has come this past decade. I hoped to get across a few points about changing nature strips from lawn to lunch during our conversation. One of these was that footpath gardening is presenting councils with something new and their response is varied, ranging from support, through indifference to opposition to demolition.

The question of freedom to choose

The expectation of local government that householders will freely maintain the footpath outside their property boundary raises questions of fairness. Councils expect citizens to donate their time, energy, mower and mower fuel to maintaining footpath lawn at their own expense, yet they are denied any say in how those footpath nature strips are used. For those wanting an alternative use for the footpath outside their front gate, this can be seen as an exploitative relationship, as neither fair nor democratic. If they are expected to subsidise councils by mowing council’s public land, then surely they should be given the freedom to choose, within limits of safety and public access, how it is used.

This is one of the arguments that have been a common response when councils have demanded the destruction of footpath gardens. What people are asking for is a say in how their footpath nature strips — the lawn monocultures between paved footpath and street — are used. They see the issue as one of equity and fairness, one of gaining a return on their free services provided to councils.

The question of insurance

There is much to clear up here. Councils need to let citizens know whether they are covered by either public place or by workers compensation insurance while maintaining this public footpath land. The same goes for equipment people use to do this work — who insures against damage? Does household insurance cover the damage or loss of equipment being used to maintain public land on footpaths? Or is this free service to councils provided at personal risk and expense if injury occurs? Maybe any lawyers reading this can advise us.

Is this free service to councils voluntary or is it a legislative requirement of local government? I ask because, in NSW, I have been informed that volunteers are considered under worksafe legislation to be ‘workers’. So if citizens maintaining footpaths are considered volunteers for councils, then are they covered by worksafe legislation and does council have to be insure them if public place insurance does not do so?

The question of productivity

Once, a noted permaculture designer and educator added up all the open space in Melbourne and suggested it could be used for food production. No doubt some of it could, given a national food crisis and if the value of open space for passive and active recreation and nature are ignored. We could add the considerable space used to cultivate what is often low-grade lawn on footpath nature strips to this total even though some of it would prove unusable due to space, access and soil contamination.

Despite whatever potential footpath food production might have, the contribution of food-producing footpaths to the food security of a city would probably be minor compared to that of community food gardens, home gardens and the commercial market gardens found on the urban fringe. Its greater value lies in increasing the urban biomass and biodiversity, and in the co-operation necessitated when footpath gardens are community projects

On social media we often encounter comments about planting parks and streets to food-bearing trees and shrubs. However good the idea it is not so simple. Unlike the street and park trees planted for their ornamental, shade or microclimate modification values (such as street trees planted to ameliorate the urban heat island effect and reduce energy use for domestic heating and cooling), plantings of edible fruiting species requires people to monitor them for insect pest and plant diseases and to take appropriate action so that trees with insect infestations do not become pest vectors for nearby home and community gardens. Also required are people who can recognise when the fruit is ripe and harvest it, what is known as gleaning. Planting, maintaining and harvesting are three main components of edible public place plantings.

The question of justice

Councils do not have fair or due process to adjudicate complaints about footpath gardens and what people plant in them. Their solution is simply to take the word of plaintiffs and order gardens removed on receiving complaints about them.

The result of this lack of due process is to hand over to vexatious people de facto control over what citizens can and cannot do on the footpaths councils insist they maintain at their own expense. There is an issue of justice conspicuously missing here.

I saw the peicemeal approach of local government when a nearby household built a small, low, well-constructed and good looking planter on the footpath outside their home. Council ordered its removal after someone complained about it, alleging the householders were taking over land ‘like Israel taking over Palestinian territory’. The irony comes when you look at the footpath strip outside the neighbouring house, complete with its raised footpath garden. That stayed because nobody complained about it.

The question of guidelines

Down at the community centre Jesse and I talked about how the practice of footpath gardening has been going on long enough now that we have a good idea of what works and what doesn’t, and that this is sufficient for local government to formulate enabling policy and design guidelines.
Guidelines would ensure:

There’s more that would need to go into guidelines of course, however we didn’t have all day for our interview so that we could discuss them all.

The question of what happens with research

Research like Jesse is doing deserves wide distribution so that both people engaging in footpath gardening and local government can learn more about the practice. A lack of funding means community and home gardening organisations cannot commission their own research, so the work of university students becomes a source of reporting on the practice and of feedback to those involved.

We need this research to fully comprehend what in some municipalities remains an underground practice, an undisclosed repurposing of the footpath nature strip into spontaneous gardens as people seek to reassert some control over the commons.