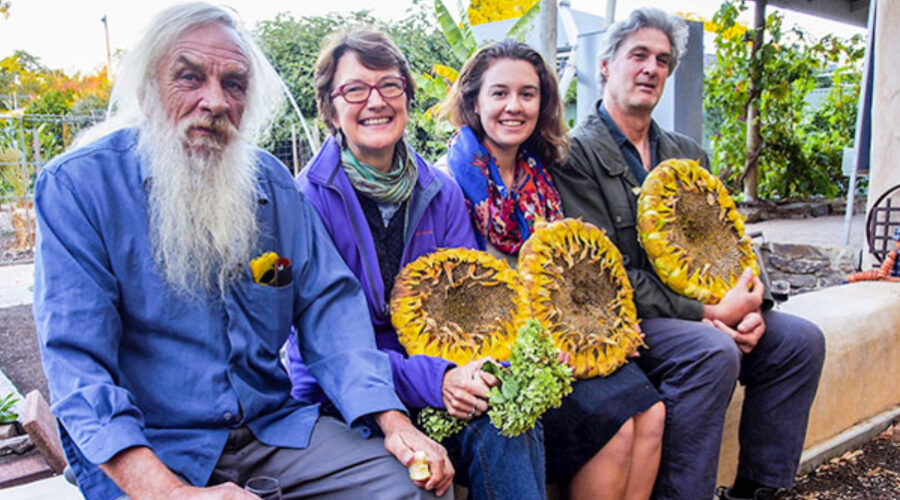 IMAGINE this: a city fronting the watery expanse of a gulf and enjoying the hot summers and mild winters of a Mediterranean climate. In that city, not all that far from its centre on land that once housed a jam factory now long demolished, a forest garden bearing a diversity of fruit, vegetables and herbs. In one corner of this luxuriant assemblage of food and the humans who tend it is a comfortable building, well insulated against summer’s dry heat, made of cement-rendered strawbales with, on its roof, the solar panels that power it and, at the back, big tanks that hold winter’s rainfall for use over the parched months of summer.

It’s a pleasing image you see in your mind, but you don’t have to imagine it because Fern Avenue Community Garden is a reality. You find it in Fullerton on the site of the old Fullerton Fruit Factory. I think it’s somehow fitting that fruit is now grown on what was once the place where it was turned into food.

Figs, citrus, stone fruit, bananas all thrive here under the kind attention of the community gardeners, and all free of the fruit fly that plagues stone fruits and figs in northern latitudes.

It was pleasing that the Fern Avenue community gardeners made this comfortable building available for April’s national meeting of the Australian City Farms & Commuity Gardens Network. What better place to talk community gardening than a building surrounded by all this food… a diverse forest of food.

Community gardeners are not a formal lot, however they know the value of structure and so had adopted a loose agenda of topics for the two day national meeting.

And now, SOAR-ing to the future

But what of the future? What are the Network’s aspirations? Working this out was an interesting conversation as it has to do with the capacity of the Network and the people managing it to carry them out in coordination with the national trend in the growth of community gardens and associated community food systems.

We used the SOAR process in assessing the Australian City Farms & Community Gardens Network. The acronym stands for Strengths, Opportunities, Aspirations and Results and is an alternative to the SWOT process (Strengths, Weaknesses, Opportunities, Threats) that sometimes becomes bogged down in the ‘weaknesses’ and ‘threats’ components. SOAR doesn’t ignore these but considers them within the context of its ‘Aspirations’ and ‘Results’ components.

Strengths — the strengths we find in the Network:

Opportunities — what is open to the Network’s intervention and what new things could be made?

Aspirations — what is it that the Australian City Farms & Commuity Gardens Network aspires to being?

Results — what can we achieve in the near future?

And… a little conviviality

A meeting without food, wine and conviviality is a poor sort of meeting, so it was appropriate that the Fern Avenue gardeners organised that on one evening we ate together at Adelaide Central Market, the main source of fresh, South Australian foods in the city and a far better shopping experience than the supermarket. On the other evening the gardeners fired up their wood-burning, brick oven that stands adjacent to the community building, and made pizza. This was washed down with the smooth, home made wine of a local councillor who came around, all to the sound of a folksy-sounding band.
David Pisoni was at the pizza evening. David is the local state MP, a Liberal, who has been supportive of the community garden and who spoke of how he is an advocate of South Australia’s GMO moratorium. The moratorium has cross-party support in government.

The notion that the Network had realised one of its goals — the recognition that community gardening and city farms are a valid urban landuse — was reiterated. The evidence for this is the growth in the number of community gardens around the country and the rate of increase over the past ten to fifteen years, as well as the increasing number of local governments adopting policy to enable community gardens and facilitating their creation. Even the NSW and Victorian state governments support community gardens on social housing estates. This was something that had been recognised before but it was now even more self-evident.

Since the first community garden open at Nunawading, Melbourne, in 1977, community gardening has moved from the practice of a few urban creatives to become part of our urban culture. Now, it is something of a diverse socio-agricultural practice with culinary, social and educational benefits. Since its beginning 20 years ago thanks to the research and foresight of Darren Phillips, the Australian City Farms & Commuity Gardens Network has played a substantial role in legitimising community gardening and related community food initiatives.

Not that all involved recognise it as such, community gardening is part of a broader fair food movement that is itself quite diverse. This realisation is growing and it remains a challenge for the food sovereignty advocates in the movement to assist community gardeners make the link between their practice and the wider food sovereignty, fair food movement.

Click on the image below to view Russ’ photo essay…