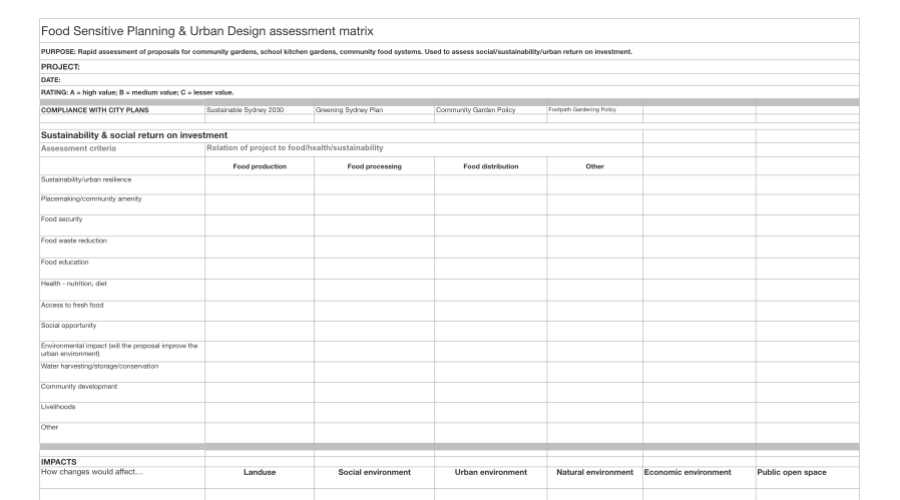 HERE’S a simple spreadsheet I made use of in assessing community, school kitchen garden and footpath gardens, as well as community food initiative proposals, while working in local government. It was developed to aid thinking and as a supplement to assessing proposals through the council’s community garden policy and other planning documents.
A big picture sort of thing, the spreadsheet aided thinking by placing proposals into the broader context. One of my uses for it was in assessing grant applciations.

The purpose of the spreadsheet was to assess urban agriculture proposals — commercial, community-based and educational — and food system proposals in the context of the big picture considerations of urban food security and food sovereignty and to the various plans and policies of the council.

Council grants were often used for these projects. The spreadsheet provided a way to think about the return to citizens, the city and council for its expenditure. Here, I am not talking about financial return. My focus was social return on investment.

The matrix or spreadsheet I developed asked about the relationship
of proposals to city plans and policies. It also provided for assessment of urban sustainability and social return on investment in terms of:

These were assessed in relation to the urban food supply chain as it applied to the type of initiative proposed: food production, food processing, food distribution, other. As this was a tool for considering proposals, it was necessarily speculative. It could, however, be followed up later to assess how well a project met those things listed and, therefore, as a tool for monitoring and evaluation.

Any preliminary assessment is really an expression of hope, however in assessing a proposal for approval these too must be taken into account.

As I said, the matrix was a big picture thinking tool that looked to the value of community food systems beyond food production and community building. In this, it would accompany other considerations for the installation of community or other food-producing gardens in the city such as those described in Community gardens — main considerations for council.

How people make use of tools like this is very much an individual thing and, for me, beneficial links that lie outside the immediate proposals for access to land or other resources is important to context projects in their urban environment. Identifying these potential links provides clues that can be built on later to expand the scope of initiatives.