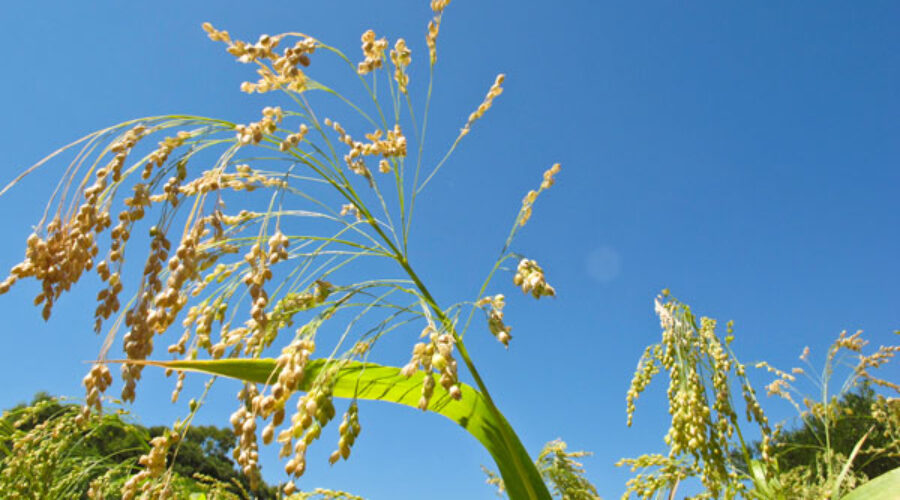 Photo and story by Russ Grayson

IT WAS a swarm. Little brown birds arrived on mass and quickly settled on the crop to enjoy a free feed of grain. Then, grain eaten, those opportunistic little creatures went on their way, bellies full.

It was as unexpected as it was spectacular in its own minor way…  and it was a demonstration of how the food web operates in the city, for the city, it turns out, offers a wide variety of feeding opportunities for wildlife.

For the people on the site it was also a question of food—how to grow it and how to start a garden on soil so sandy that rainwater and nutrients quickly filter through? This is the challenge the coordinators of the Permaculture Interpretive Garden face in Sydney’s seaside Eastern Suburbs.

The garden is located adjacent to Randwick Council’s community centre and was built as a food education resource and public park to complement the retrofit of the centre to make it energy and water efficient. A sign of that is the wind turbine humming away in the southerly breeze that frequently blows through this place. Council’s sustainability educator wanted a facility for practical work for her organic gardening and Living Smart courses and for the school sustainability education program, and it was the vision of a multipurpose education centre and public park that brought about the creation of the Permaculture Interpretive Garden. This is not a community garden. It’s a new type of city park that has community involvement beyond what parks usually bring and demonstrates the mixed use of public open space that’s destined to become more common as our urban population grows.

But that soil… it’s just sand and when it rains the water sinks straight through and takes whatever nutrients happen to be on the surface with it. Clearly, this is a disadvantage when it comes to growing herbs and vegetables and in planting the forest garden, but the garden educators—council’s sustainability educator, Fiona Campbell, and the designer and builder of the garden, Steve Batley from Sydney Organic Gardens—knew what to do.

What they did was to plant seeds, not seeds that would grow into something people could eat, but seeds of grain and legumes that together form what’s known as a green manure. Essentially, it’s food for the soil, the grain when slashed decomposing into fibrous organic matter that improves the soil’s ability to retain moisture and the legumes degrading into organic material and releasing the important plant food, nitrogen, into the soil. Here, it is found by plant roots and used by them as nourishment.

There have been several generations of green manure planted in the food forest zone, the mix of grain and legume different in the warm and cool seasons. Summer green manure crops have been a mix of Japanese millet and cowpea and winter’s a mix of vetch and oats.

Green manure is ready to be incorporated into the soil when the grain turns to seed but before the seed heads dry out. There’s two ways to do this. Tthe crop can be slashed and left on the soil surface as a mulch or it can be turned into the upper layer of the

soil—it’s what’s known as slash-and-mulch or chop-and-drop. Alternatively, it can be slashed and composted, the finished compost being returned to the soil, completing the green manure cycle.

In one of the cropping cycles the green manure was left a little too long before cutting and the millet went to seed. That’s when those voracious little brown swarming birds discovered it. You can imagine their scouts out making on reconnaissance and coming across this feeding resource, then flying rapidly back to the flock to announce their chance discovery (is this how birds find food?). Back comes the hungry mob and there goes the millet.

Someone identified these flying opportunistic feeders as finches, but the gardeners didn’t really mind their claiming the crop for they had no plans for the grain other than turning it into the soil, and there was plenty of fibrous plant material for that.
It was when the green manure crop following that claimed by the finches had fully grown and the soil was densely covered in its green fuzz that a discovery was made. That happened when Steve and Fiona were working in the garden and Steve spotted something small and green down in the tangle of vegetation. It was about a centimetre, maybe a fraction longer and it wasn’t all alone there. A quick look revealed them perhaps in their thousands—little green frogs in great multitude.

The forest garden area—it is used for council’s new food forest gardening course—has now entered a new phase in its development. Initially, a number of pomegranite, olives, citrus and almond had been planted and had done their best to survive in the sandy soils, drying summer heat and strong winds. The forest garden is being planted over time, not all at once, allowing plenty of time for soil improvement and for plantings at community events and during the food forest courses.

This new phase has brought plantings of several more olives and a couple specimens of the Australian bushfood tree, the narrow-leaf lillypilly (Syzygium leuhmanii), the latter destined to grow on the southern edge of the garden to serve as windbreak with the edible, clumping bamboo when that is established.

It has also brought the end of the green manure cycle in the forest garden area. Green manure is what is called an ‘annual’, the grain and legume going through their life cycle, seed to seed, within a year, seasonally in its case. The green manure has now been replaced by a living mulch, another of those legumes that bring much-needed nitrogen to the soil. It’s a perennial, which means it lasts more than a year, and it’s a plant called alfalfa.

This will eventually form a living mat on the soil several centimetres in height, and will act as a conventional straw mulch does in providing nutrients to the soil and the trees, shrubs amd groundcovers planted in it, protecting the soil from erosion by heavy rainfall and ameliorating the soil temperature during the heat of summer. Future trees and edible shrubs will be planted through the living mulch.

So, green manure that feed plants and wandering birdlife and that provides refuge for tiny frogs… a living mulch that both protects and feeds the soil and young fruit and nut trees that will eventually shade and feed people… that’s working with nature to create solutions for productive forest gardening.

The Permaculture Interpretive Garden’s food forest is destined to leave quite an edible legacy.