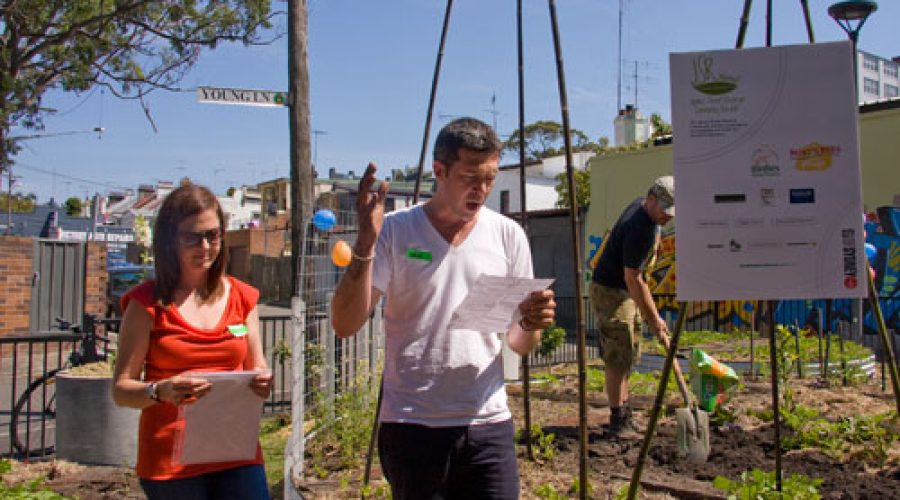 Half of a pocket park tucked away behind a car wash in Redfern has been transformed from a patchy, underutilised lawn into a productive food garden thanks to the efforts of a team of local people and support from the City of Sydney. Janet Verden reports…

IN APRIL 2009, a group of inner-city residents was inspired to start the James Street Reserve Community Garden to transform an under-utilised and undesirable space into a vibrant and community-oriented one. It also presented us with an opportunity to overcome the space challenge associated with our inner-city gardens and increase our ability to grow fruit and vegetables.

Our garden vision is ‘to create a living garden (an ever-evolving and experimental space that embraces change) that makes the James Street Reserve an attractive and safe space that welcomes everyone, encourages community spirit, facilitates learning and information exchange and acts as a sustainability role model’.

The garden, designed to fit into an existing run-down pocket park that is a well-used pedestrian route to the nearby supermarket, allowed all existing, main park elements such as the path, seats, and large native trees to remain. A low, unlocked fence was placed around the garden area to enable everyone to walk through and sit in the garden. Circular raised beds were selected to create the largest planting area, to provide space for new soil, to prevent sharp corners, and to provide a bright distinguishing pattern. A row of small fruit trees was planted along the lane footpath, including deciduous nut and quince and a variety of evergreen citrus.

We formed the James Street Reserve Community Garden committee even before the grant had been approved. Regular meetings were held and our committee focused on the development of its management plan (including its approach to governance, membership, gardening practices, health and safety etc).

On approval of the Matching Grant, a membership drive was organised so that local residents had the opportunity to become active participants in the garden. The members’ Information Session was well attended and there is now a core group of motivated and engaged members, including a number of young and enthusiastic gardeners.

The first phase of the garden build and planting took place in spring 2010.
An initial planting design was developed that would allow the vegetable and herb crops to be rotated for ongoing soil health.

Two of the beds contain perennials such as herbs and strawberries to ensure there will always be something growing and to maintain an attractive garden.

The first planting was in spring 2010 and a wide variety of vegetables and some fruits were grown, mostly by seedling. Like all living things there will be a bit of trial and error in the first few years to see what species thrive and are the most successful. While small teams have responsibility for maintenance of each bed, the harvest will be shared.

We have a number of plans for further developing the garden, including additional garden beds to maximise our harvest and the garden aesthetics, a children’s space to further engage local children with the garden and a compost system and water-tank in support of our organic and sustainable garden objective.

The official opening of James Street Reserve Community Garden by Lord Mayor, Clover Moore, is scheduled for October 30, 2010.  This will be an opportunity to celebrate the establishment of the garden and to thank the many people who have already contributed to this positive community project.

It is hoped that the James Street Reserve Community Garden delivers a number of benefits including increased community spirit, improved quality of life and increased understanding of sustainable and organic gardening practices.