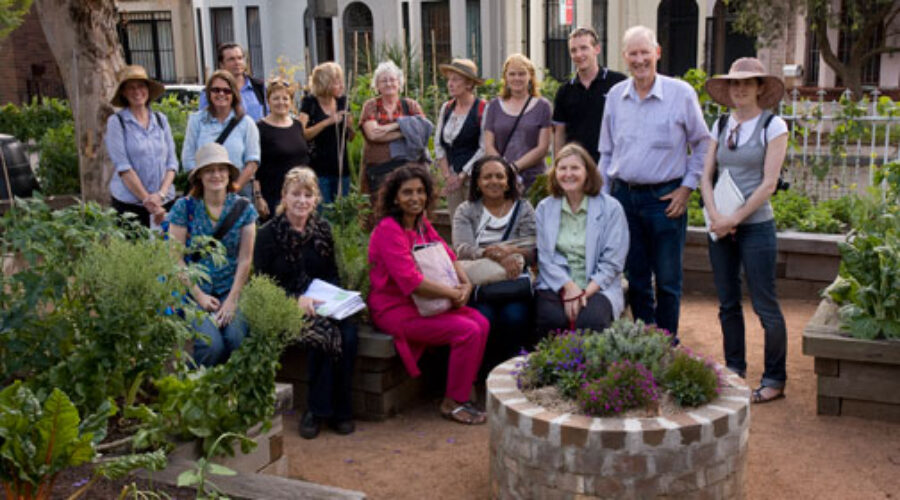 THE NEWTOWN GATHERING of the Sydney Community Gardens Supporters Network in November this year was a sharing of experience and knowledge on how local government can support community garden start-ups and on solving the challenges that inevitably arise in the development of community gardens.

The Supporters Network has operated for several years, meeting each time at a different council premises. The Network aims to encourage mutual assistance and the sharing of learning and advice between local government staff and others whose role is to liaise with and support the development of community gardens.

After participants introduced themselves, I made a presentation of the trends and learnings distilled from research carried out in the preparation of policy direction and other documents on community gardening for local government.

This was followed by discussion of some of the burning issues being faced by participants in their work in community garden development, including how to deal with opposition to community garden start-ups. The participatory World Cafe format saw participants move from table to table to share their knowledge around these topics.

A network for self-help

Attendees at this year’s gathering came from the councils of the City of Sydney, Randwick, Waverley, Bankstown (two participants), Canterbury, Warringah, and Lake Macquarie.

In addition, there were:

A short walk along King Street

Newtown’s King Street is a traffic and people-congested strip of cafes, bookshops and delis and it was along it that we took the sort walk to Newtown Community Garden after winding up the meeting phase of the Supporters Network.

Like the small pocket parks that dot our city, Newtown Community Garden is a pocket community garden. Occupying the land around a community centre, this compact but neat and productive garden operates autonomously and receives support from City of Sydney (the City supports around 13 community gardens, not all of them on City land). It was rebuilt by a landscape design company, Sydney Organic Gardens, a number of years ago as a pattern of raised timber beds around a central, circular garden bed. The garden has a water tank as well as covered seating and compost facilities. The raised beds are divided into small allotments and there is an area of shared gardening space.

On to Angel Street

After being introduced to the garden by Ian Ferry and having a look around, the gathering took another walk down King Street, taking the turnoff to the Angel Street Permaculture Garden that occupies a once-disused corner of land belonging to the adjoining high school. The garden adjoins a park and the the narrow street is lined with compact, Victorian era housing once occupied by working class people but now occupied by those of the middle class, as is much of Newtown.

Angel Street is about to undergo change with a new crew bringing new ideas to the site. This is one of Sydney’s earlier community gardens, started in 1991 as a default site after its originators failed to gain access to the then-new Sydney Park, in which they planned to start a city farm.
The garden is quite different in appearance to Newtown Community Garden. Whereas the Newtown garden can be taken in in a single glance, Angel Street is a garden of short sight lines, twisting, twining, narrow paths and an edible understorey and canopy. Angel Street garden is a food forest.

On arrival, garden host, JP, handed out labels and markers so that participants could make signs to attach to species they could identify. He took the visitors along the twining trails, through the food forest that occupies the flat area of land adjacent to the fence and up the terraced slope.

Once, Angel Street was a shared garden but the new regime is introducing a small number of allotments in the limited areas that are suitable.
For the visitors, both the Newtown and Angel Street gardens demonstrated that even small, inner urban community gardens can be productive. They also showed how different community gardens can be in structure, appearance and organisation.

Next year at Canterbury

The usefulness of Sydney Community Gardens Supporters Network events lies in the connections that are made between people. Connections made at events can be further developed via phone of email, questions and dilemmas discussed and, possibly, solutions discovered.
Canterbury Council has volunteered to host the next meeting of the Network.