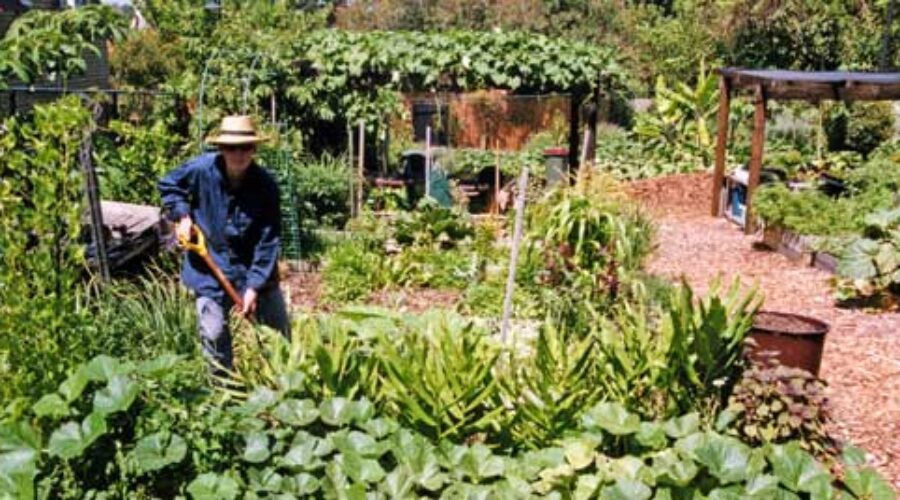 Sydneysiders get their hands dirty

By Russ Grayson. This story was first published in ABC Organic Gardener magazine, 2007.

FOR JEAN PIERRE, it’s been a long morning. He hoped to get more gardening done but that was not possible. As coordinator of Randwick Organic Community Garden, he’s spent as much time speaking to people as tending the vegetables in his allotment.

This year, there’s been increased interest in the community garden. Now, all the allotments in the 20 x 60 metre site have been taken and Jean Pierre has started a waiting list of people who want to garden.

But it is not just the demand for garden allotments which keeps Jean Pierre busy these days. Both he and the other gardeners are now focusing on a threat which could see the community garden engulfed in a spreading tide of concrete, asphalt and brick. The planned subdivision of the surrounding Navy land, which includes the garden, would see the transformation of the area into medium density housing.

On a sunny, north-facing slope in the grounds of the old Rozelle Hospital, the green of the vegetables contrast with the reds, whites and yellows of the flowers which wave gently on the late Spring breeze. This is Glovers Organic Community Garden, Sydney’s first.

Glovers had already been in use for nine years when, on a sunny, late-Autumn morning in 1994, Randwick Organic Community Garden made its start as one of four community gardens in the Sydney region. Since then, the number has grown to more than ten, with more on the way.

When Glovers garden was built around 15 years ago, there had already been community gardens in Melbourne for at least five years. There, Nunawading Community Garden, opened in October 1977, is credited with being the first in Australia.

Brisbane would have to wait until the mid-1990s for its first — the Northey Street City Farm on the banks of Breakfast Creek.

Now, twenty-two years after they first appeared in this country, community gardens are seen by local government and other bodies as an established and valid use of public land.

Throughout the1990s, the trend has been towards a growth in their number, although nobody knows how many there are at present in Australia. An inventory of gardens made by the Australian Community Gardens Network in 1996 identified 40 gardens, however the number has since grown substantially. It’s likely that the total is now at least double the1996 figure, probably more.

Mary is an energetic, retired woman who gained her experience in the Randwick community garden. Now, within shadowfall of the high rise of the Bondi Junction shopping centre, she is guiding the construction of Waverley Community Garden, the eastern suburb’s third such garden.

Like all community gardens, the main crop at Waverley will be fresh vegetables and culinary herbs. Later, the young fruit trees recently planted will diversify the harvest.

Not all community gardens grow fruit — most devote all of their space to intensive vegetable production. In Sydney, it’s the Angel Street Permaculture Garden in inner-urban Newtown and the UNSW Community Permaculture Garden at Randwick which have a substantial number of fruit trees. In Melbourne, participants in Collingwood Children’s Farm, a large site on a bend in the muddy Yarra, produce fruit in an orchard and vegetables in large allotments.

Whether the gardeners choose to grow fruit as well as vegetables and herbs, most choose to garden organically. Organic growing has proven to be cheaper than buying in fertilisers, pesticides and herbicides and guarantees clean, fresh food. Importantly, organic gardening makes use of our wastes — our kitchen scraps, lawn clippings and, in Sydney, stable sweepings from Randwick racecourse and the NSW Police stables. These are composted or used as mulch, breaking down into the nutrients which feed the plants and protect the soil in the drying heat of the Sydney summer.

Take a walk through Glovers garden or Angel Street Permaculture Garden, then do the same at the Randwick garden or any number of Melbourne community gardens, and one thing will become clear — they are organised differently.

Angel Street, tucked into the disused backblock of a high school, is a shared garden, as is Glovers Organic Community Garden in Rozelle. Members share whatever work needs doing, then, at the end of the day, they share whatever produce is ready for picking. To coordinate activity, a log book is used to record work which has been completed and to let the next group of gardeners know what needs doing.

Randwick Organic Community Garden, on the other hand, is mainly an allotment garden. Most members have their own allotment or plot in which they grow their vegetables and have exclusive rights to what they grow. Randwick also has a large circular garden bed which is used as a shared garden for people who do not want to tend their own plot. It also has a chook yard, the birds being fed and maintained by a group who, on their rostered maintenance day, can take as many eggs as there are chooks.

In reality, there is plenty of evidence that both methods – shared gardens and allotments – work well. Although most of Melbourne’s gardens use the allotment system, Sydney gardeners have favoured the shared model.
Whatever model is used to manage the garden, building good relations with local government has been crucial. Staff from the waste management, landscaping and community services sections have been the key to gaining council support for the establishment of community gardens. In both Sydney, Melbourne and Brisbane, most community gardens occupy local government land.

Not far from Fitzroy’s cappuccino strip in inner-city Melbourne stand the Ministry of Housing’s high-rise flats, huge squares of concrete straddling open parkland. Unlike housing estates elsewhere, these concrete towers have their feet firmly anchored in an orderly community garden of vegetables and herbs.

The garden owes much to the persistence of Basil Nattoli, an enthusiastic horticulturist-come-community worker who has gained the confidence of the predominately Hmong residents of the tower blocks.

The vegetable beds of the Fitzroy housing estate are intensively worked; crops of Asian and European vegetables are close planted, producing a bountiful harvest for the families in the towers. To minimise maintenance and to increase durability, the garden beds have been built of concrete block or timber and, for ease of access, raised above the paved pathways. About ten minutes walk away, Basil has fostered another community garden among the medium density flats of Chinese and Turkish immigrants.

There’s a similar scene in Sydney’s Waterloo housing estate, whose towers dominate the skyline south of the city. Identified in recent research as one of NSW’s most deprived areas, the residents of the tower blocks have proven more resourceful than they have been given credit for. Thanks to cooperation between the Department of Housing and South Sydney Council, the estate is presently home to three new community gardens with more on the drawing boards.

The idea was sown by social work students from UNSW on work placement in the estate. It has been made manifest by council’s waste education officer, Rhonda Hunt, a community worker who has organised training for the gardeners in basic horticulture and composting. Rhonda earlier started the nearby Waterloo Uniting Church Community Garden.

Far from the inner city, community gardens are playing another valuable role in community rebuilding near Campbelltown. There, the common land of the Claymore Estate had been the reserve of a local gang until a determined group of residents decided to oust them by building a large expanse of community gardens. Now, where crime and police chases were common, Pacific Islanders, Vietnamese, Australian and other residents of the estate have built huge community gardens whose appearance has more in common with a Pacific Island bush garden than an orderly Australian vegetable garden. There, an understorey of broad-leaved taro and close-planted vegetables grows in the shade of banana trees and sugar cane.

In Fitzroy, Waterloo and Claymore, community gardens have become true community-building tools and, as such, are attracting the increasing interest of community workers and local government community services staff. In these locations and others, community gardens combine access to nutritious food and serve as a focus where families meet on safe territory.

Meanwhile, in Sydney’s eastern suburbs, Jean Pierre and other Randwick community gardeners are preparing to lobby council. Their garden, part of the Randwick Community Centre, has proven its worth as a source of fresh food and as a social meeting place. If it has to move at all, they are determined to see it rebuilt adjacent to the proposed new community centre. There, it will continue to serve its members as well as the thousands of people destined to move into the new housing in a couple years time.
Community food gardening is an idea whose time, in the new millennium, has truly come.