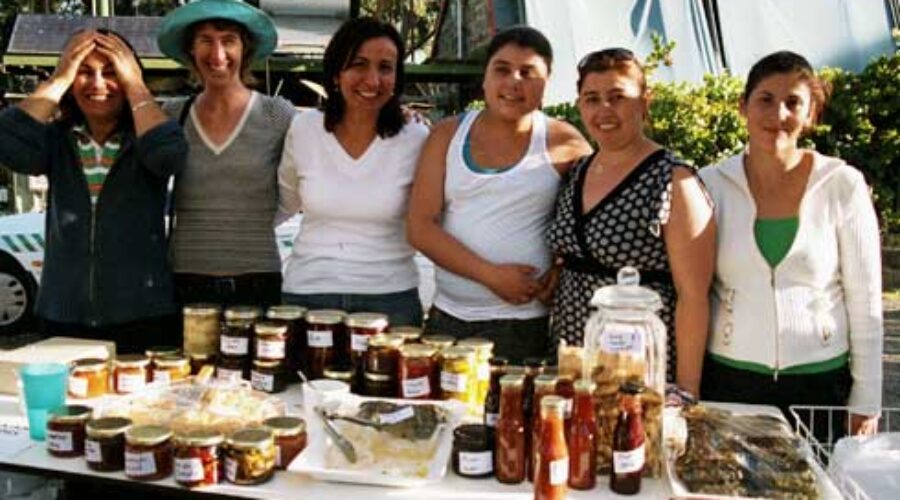 FOOD IS AT THE CORE of all community gardening, but add celebration and food assumes a greater significance. It becomes something special.

This is what happens every March in Melbourne’s East Brunswick. There, on the banks of Merri Creek, the CERES Harvest Festival attracts thousands to its celebration of food and the creativity and conviviality of growing, harvesting, cooking and eating the stuff. It’s a celebration of nature’s edible bounty as the CERES community and market gardens give up their ripe produce to people eager to cook and eat it.

This year among the stalls, workshops and displays for sustainable living, the women of the CERES Food Project were selling dolmades, baklava and the preserved foods they had prepared from the harvest. There was the CERES community garden seed network and the community gardeners themselves, a multicultural bunch a few of whom, from a table stacked high with vegetables, herbs and grapes from their allotments, provided samples of a fruity red wine made from grapes grown in the community garden vineyard.

The Harvest Festival was also the final day of the carbon-neutral, national conference of the Australian City Farms & Community Gardens Network (ACFCGN), an event supported by VicHealth and organised by the capable crew from Cultivating Community, CERES, Collingwood Children’s Farm and Garden of Eden. The conference, which was themed around community gardening/city farms, food security and educational food gardens in schools, and which included the Seed Savers’ Network annual gathering, was opened by Richard Wynne, Victoria’s Minister of Housing.

While busloads of conference people went off to view food gardens in schools, others took another bus to be inspired by some of Melbourne’s community food gardens.

Like so many community gardens in this humane city, those visited were notable for their productivity, size and good order. I have to say that this city has the greatest number, the most productive, best organised and best presented community gardens in the country. It also has the oldest – Nunawading Community Garden, founded in 1977.

Winding its way through the narrow back streets of Richmond, the bus disgorged its disoriented passengers in front of the broad field of allotments that is Highet Street Community Garden.

The Highet Street garden, built for the Department of Human Services tenants who occupy the high rise blocks behind, and assisted by a Cultivating Community support worker, has turned an anonymous field of lawn into an urban, food-producing farm. It is an example of the type of development the conference speakers said we will need more of to adapt to the low-energy society that could follow both the peaking of the oil supply – ‘peak oil’ – and global warming.

Many of those gardening the 96 allotments are East Timorese who produce the bewildering range of vegetables, fruits and culinary herbs. Sweet potato is grown, however Melbourne’s climate is too cold for the vine to produce tubers. Instead, the leaf is cooked as a green vegetable. Corn is grown with pumpkin in an arrangement reminiscent of South American gardens, the broad, pointed leaves of taro stand above shorter vegetables and trellising utilises vertical space – an important consideration in the limited area of a garden allotment.

A neighbourhood garden built on local government land, Essendon Community Garden provides a total of 75 allotments large enough, at 30m2, to grow a substantial amount of food. As in many community gardens at this time, Melbourne’s dry weather presents a challenge, with water restrictions permitting irrigation by hose only twice a week. The gardeners, though, know that a compost-rich soil retains moisture, so compost production is an important activity at Essendon as it is in most community gardens.

Large or small, Melbourne’s community gardens and its sustainability education centres, like CERES and Collingwood Children’s Farm, are the prototypes of projects that will relocalise our food supply and create the community bonds that a warmer and oil-deficient future makes imperative.

Russ Grayson is media liaison for the Australian City Farms & Community Gardens Network and a member of the Network’s executive team.