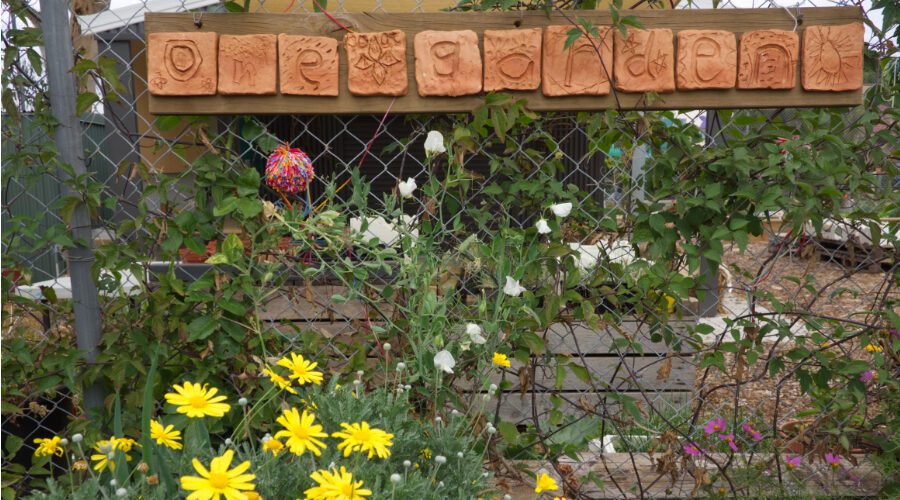 This story by Russ Grayson was first published in ABC Organic Gardener magazine in 2006.

SIZE DOES NOT MATTER when it comes to community gardens — some of the smaller gardens are among the most luxuriant and productive.

Take the original Wooloomooloo Community Garden that once existed below the Eastern Suburbs railway viaduct. That was only a few tens of metres in area yet its raised garden beds were prolific and the entire garden displayed an orderliness forced by limited space.

There’s also the small community garden at Newtown Neighbourhood Centre with its vegetables and herbs crammed into well made, raised beds between street and building. Not far away in Glebe there’s a little garden tucked away behind an old sandstone church.

The original Wooloomooloo Community Garden, built in the 1990s, packed a lot of productivity into a few square metres. The garden was later moved to Sydney Place, Woolloomooloo, where it is found in a somewhat larger form today. The garden is assisted by City of Sydney, first through its waste educator, Michael Neville, then later by Annie Walker, the City’s Community Gardens and Volunteer coordinator.

The original Wooloomooloo Community Garden was situated below the viaduct of the Eastern Suburbs rail line. Limited space forced gardeners to make use of trellises and fences for vertical growing space.

You could be forgiven for thinking that such tiny gardens are the product of limited space availability in our big, dense cities like Sydney and Melbourne, however you would be wrong. Take a walk down Surrey Street in suburban Goodwood, a low-rise inner residential zone in the spacious city of Adelaide. Surrey is an ordinary, tree-lined suburban street but it’s when you come to the corner that you notice something different. Tucked into a narrow strip between footpath and tennis court is a tiny community garden brim-full of vegetables and herbs.

Smallness of area is not the only thing tiny about this miniscule community garden. So was the cost of setting it up. “It cost only about $350 to establish, which we paid for out of our own pockets…,” explains Goody Patch Community Garden spokeswoman, Penny Bridge, who adds that “ …we only started on the garden at the beginning of October last year… 2005”.

Penny, who speaks with an English accent acquired from years of working in the UK, is a young woman with long blonde hair and green eyes. The sort of practical person who gets an idea then works cooperatively with others to make it reality, Penny and her partner are local residents with two young children in nearby Goodwood primary school. It is the school which she and others have been trying to get active in Goody Patch.

“Last year, with another woman, I did a presentation to the school council about the benefits of food gardens to the students,” she says. Interest there has been, but not enough yet to build the garden into the learning life of the school. That may come, but there are procedural considerations to be dealt with first, such as moving children the distance of five houses or so from schoolground to Goody Patch, and the lack of a toilet near to the garden.

The land is owned by South Australia’s Department of Education and Community Services. The area that became Goody Patch was covered with kikuyu grass when the community gardeners started work.

“There have been four weekend working bees”, says Penny. “We prepared the soil, mulched… and then the rain came. And we built a low fence around the garden”. That fence is too low to keep anyone out and Penny is happy that the site has not been vandalised.

Goody Patch is an allotment garden – there are no shared garden beds. Five of the allotments were made available to those who had contributed to Goody Patch with funds, time and energy, one of whom is Jeremy Urquhart, a well-known Adelaide permaculture community activist closely associated with the Australian City Farms & Community Gardens Network; the remaining three allotments are for community use.

An attractive sign announces Goody Patch to passers-by. Signage helps establish a sense of place for a community garden and a presence in the neighbourhood

Goody Patch shows that narrow pieces of land can be turned into community gardens.

Penny became involved in the Goody Patch project after she had been inspired by Melbourne’s Veg Out Community Garden in St Kilda, which occupies what once was a bowling club. Could it be that she has her eyes on the adjacent tennis courts, envisioning choko and passionfruit scrambling up their wire fences, allotments spreading bacteria-like across their smooth playing surfaces and fruit trees growing up around their perimeter to enclose them in an edible treescape?

With her own children at Goodwood primary, Penny and the other community gardeners are eager to bring the school children into the garden. Schools and food gardens are a beneficial blend if children are to receive proper eduction and guidance about food. There is no better way to counter the advertising and consumption of junk food, and to beat childhood obesity, than encouraging children to grow, process and cook delicious food. It’s the doing and enjoying of this, rather than stern lectures from teachers that will encourage school children to enjoy healthy food.

For Penny, though, one of the really good things about working in the garden on those bright, sunny Adelaide afternoons occurs when people walking past smile at the gardeners and stop to talk. How could anyone not smile at the sight of a flourishing community garden, green with vegetables and busy with active gardeners who know that happiness is found in the conviviality of friends working on a common endeavour.

The small community garden over in Hillcrest is the result of a big idea that came from a local reconciliation group which met at Gilles Plains Community Centre. Kurruyu Pingyarendi is not quite as diminutive as Goody Patch but modest size has not stopped the gardeners packing a lot into a little space.

A mature, shady tree that was on-site before the garden was thought of shelters summer gardeners below its spreading foliage. It will soon by joined by others the gardeners have planted, such as the less-commonly encountered Malabar chestnut with its edible seeds. It’s only about three metres high at present, but within a few years its palmate leaves will cast more of that welcome shade.

Kurruyu Pingyarendi Community Garden is truly multi-purpose, containing fruit trees, herbs, vegetables, sensory garden, bush food garden and frog pond. There’s an open meeting place that provides a link to the Kaurna, the Aboriginal tribe that inhabited the area. It takes the form of a sculptured spiral that unwinds across a clearing and is illustrated with images bearing the Kaurna names of the plants, birds and animals on the area.

Gardeners maintain links with the adjacent school and child care centre which were involved in the creation of the artwork.

Goody Patch and Kurruyu Pingyarendi and Newtown demonstrate that small community gardens can be productive of both food and community amenity. As places where people come together, they facilitate the conviviality that builds a sense of place and community. In a world that may have to face increasing food prices due to the rising cost and peaking of the oil supply, even small community gardens will have a big role to play in making our suburbs environmentally, economically and socially places to live.