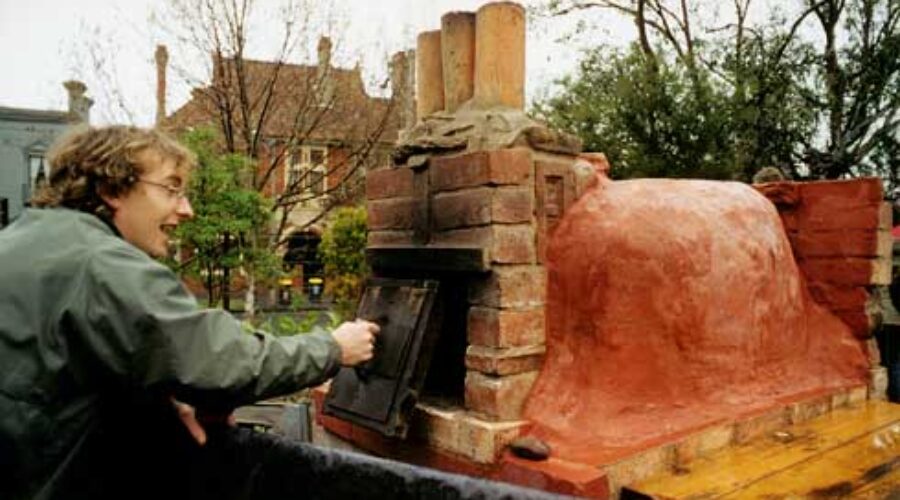 NOTHING BRINGS PEOPLE TOGETHER quite as convivially as the sharing of food. Now, some community gardeners are taking that further by sharing the building of the oven in which the food is cooked.

Cobb ovens are hemispherical structures of varying size, and the benefits of building one in a community garden are many, according to cobb oven expert and cobb workshop leader, Linda McKee.

“There is the shared experience of building the oven… a kinesthetic, satisfying and very tribal experience. Then there’s the cooking and sharing of the meal which brings people together. There is something about gathering around the domed, circular shape of the cobb oven that is pleasing.

“In a cobb oven you can cook almost anything that can be cooked in a conventional oven”, says Linda.

“Pizza, focaccia, roasts, deserts, cakes… you can even bake bread”.
And, scones too, such as those prepared at Northey Street City Farm’s Saturday morning cafe, which are sold to shoppers at the adjoining farmers market.

Cooking is done by feeding fuelwood through a door and burning it until it forms a bed of hot ash, during which the clay walls of the oven absorb the heat.

When the flames have died down, food is placed inside to cook and the door closed to seal in the heat. Cooking takes place through convection, conduction and radiation.

Scrap timber can be used to make the fire, says Linda. Old, unpainted fence palings are suitable but hardwood is better as it burns at a hotter temperature. The important thing is to build a steady, hot fire to heat up the clay shell of the oven. The coals can be removed after firing and the heat stored in the thermal mass of the cobb radiates back on to the food.

“You need to heat the oven for 20 to 25 minutes”, says Linda, even if you are baking something that takes only 10 minutes or so, such as scones.

As a rule for food with longer cooking times, leave the fire burn for about the same time that the food will take to cook. The coals can be removed from the oven and placed back again if the oven needs reheating.

“Food seems to cook better if it is raised on a rack off the floor of the oven, such as a steel refrigerator shelf or similar metal device supported on bricks. It is difficult to build the fire and move the coals if racks are built in”, says Linda.

Cobb is a mix of clay, sand and straw stomped to a plastic consistency. The oven is built outside, though a few have been built inside buildings. “They are like a barbecue, only better”, says Linda.

“You need a clay soil and the mix must be right. The oven will crumble if there is too little clay and will crack if there is too much. Ten to twenty per cent clay is the right amount. There will be sand and other materials in the soil and it is advisable to assess the percentage of clay available”.

This can be done by the jar test. Place an amount of the soil in a jar and top up with water. Allow the contents to settle over several hours or longer. Do not shake the jar. The clay, sand and other components will settle into strata that are clearly visible.

Straw is added to the mix while it is being kneaded.

“I prefer barley straw”, says Linda. “It is of tubular cross section, soft but strong, however the oven can be made using rye or oat straw”.

For an oven of one metre diameter, Linda suggests that a half-bale of straw be used. An oven measuring around 1200mm diameter would use a full bale.

A sand mould is then prepared by heaping sand into a dome shape sized to the inside dimensions of the oven. This should be done close to where the oven will be made. A well is made in the top of the sand mound and water poured in, then left to soak for 24 hours.

“The size of the oven depends on the number of people that it will be used to prepare food for”, says Linda. “A one-metre (1000mm) diameter oven will do for a family.

“The cobb oven at Northey Street City Farm is 1200mm diameter and that is big enough for a community garden. We use the city farm’s oven to cook for up to 70 people. 1500mm would be a bit too big”.

The height of the oven is approximately 60 to 70 percent of the internal diameter. Linda suggests placing the oven on a base of fire bricks — these retain heat and release it inside the oven through radiation and the convective heating of air.

“Pavers have been used as have house bricks and, on one occasion, concrete bricks”, explains Linda. “Cement blocks do not retain heat as do other types. It is best to use thick bricks”.

When solidified, a domed door of about 63 percent of the internal height of the oven is cut. The door itself can be made from hardwood faced with metal on the inside and equipped with a handle on the outside. The door is used to control the air flow into the oven, which controls the rate at which the wood burns and to trap heat inside while cooking.

The oven can be built directly on the ground, but Linda advises building a sturdy base capable of supporting the weight of the oven. “This brings the oven to a convenient working height. It can be a hollow structure but it must be strong. Wood, in the form of a table, has been used. The heat from the oven does not seem to affect it. Some people have used modern fibro (not the old fibro that contains carcinogenic asbestos) between the oven and the stand as this insulates.”

The stand can also be made of brick, mudbrick or similarly sturdy material. Making it slightly larger than the oven provides convenient working space.
At Melbourne’s Garden of Eden community garden and training centre, the small cobb oven has been equipped with a chimney, as has that at Yandina Communtiy Garden in Queensland.

“People think a chimney removes smoke”, says Linda. “But they are not necessary unless the oven is inside a building and you need to remove the smoke outside”. Ovens will generate smoke during the heating stage, when the wood fire is built, however the door is left off to vent the smoke.

The final job is construction of a simple, roofed shelter for the oven. Although some community gardeners do not bother protecting their ovens in this way, it reduces weathering due to heavy rain.

The oven can be fired up as soon as 48 hours after construction.

The first firing and the first food from Linda’s latest effort fed enthusiastic and hungry workshop participants at Tash Morton’s home at The Gap, Brisbane. Like that at Paradise Street community garden in West End, Tash’s cobb oven was sculpted with a touch of animistic whimsy — it looks like a giant turtle complete with head, snout and teeth. A visitor to the Paradise Street Community Garden made the error of identifying the oven there as being shaped like a chook. He was quickly corrected. It is, in fact, a phoenix.

Community gardeners who take the time to build a cobb oven will be rewarded with hot, steaming bread, juicy pizza or perhaps scones ready for jam and cream. Whatever the gardeners cook, a cobb oven is the key to a ritual both ancient and modern — the shared cooking and eating of locally produced food.

DIFFICULTY: High. Needs skilled advice or knowledge of making cobb and using it in construction. Also need to know how to cook or to follow a recipe.

Best for community gardeners to learn cobb oven construction by organising a workshop with a skilled cobb oven technician.

SCALABILITY: Limited by construction integrity of cobb and construction quality. Can be made to reasonable size but larger ovens might better be made of brick. Might be better to make two or more smaller cobb ovens rather than large one.

REPLICABILITY: Quite replicable providing the design and construction skills/advice are present. Needs source of clay and straw.

Materials: Low maintenance needs due to the durable materials and construction. Shelter the oven from rain with a simple roof to prevent erosion of cobb.